Adaptogens are natural stress-protective compounds or plant extracts that increase the adaptability, resilience, and survival of organisms.  The first definition of adaptogens is dated 1958. Tremendous progress in biology and medicine during the last 60 years has had a significant impact on the research of adaptogens. Consequently, a better understanding of how they work in the organisms resulted in the evolution of the definition of adaptogens.

The milestones of adaptogens research and use in medicine: Monograph 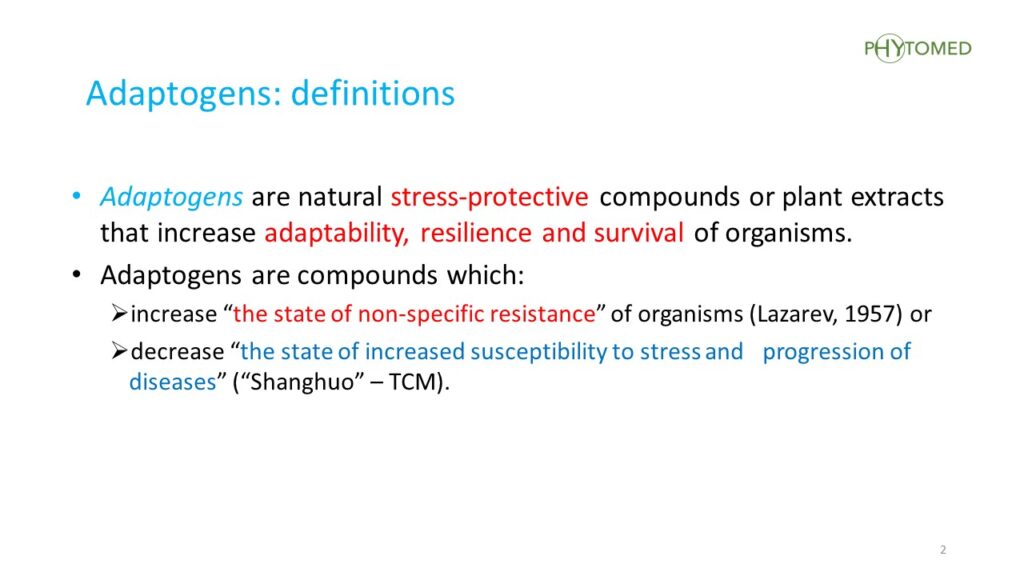 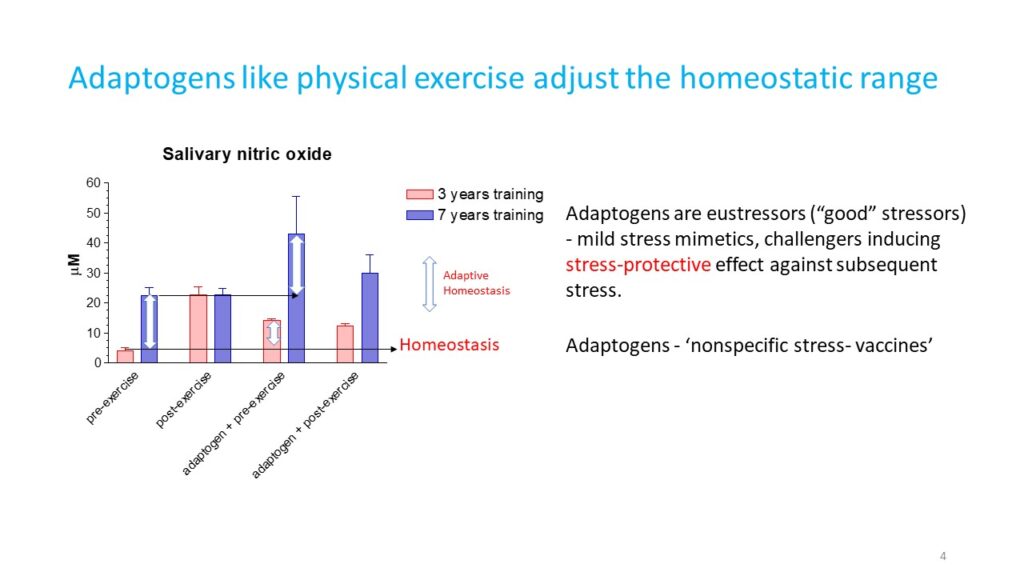 The principal active constituents of adaptogenic plants (as investigated thus far, table 1) can be divided into two main chemical groups (1):

Many studies indicate direct interactions between tetracyclic terpenoids and corticosteroid and estrogenic receptors (1).

*This table is an update from the reviews Wagner et al. 1994 and Panossian and Wagner 2011.  It includes plants which do and do not meet the formal definition of adaptogen. In various countries, adaptogens are used as dietary supplements or/and conventional and traditional medicinal products (2-5).

Mechanism of action: multitarget effect on neuroendocrine-immune system including:

What is necessary and sufficient to be considered as an adaptogenic plant? 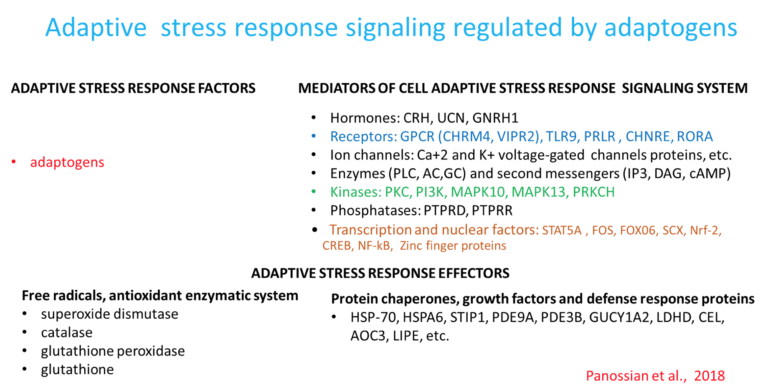 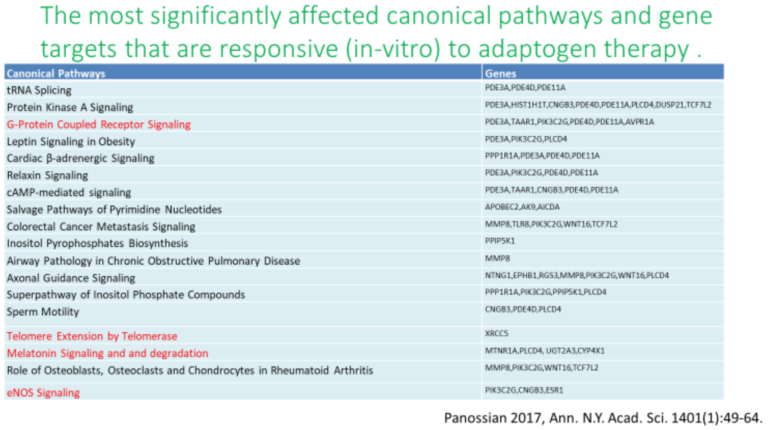 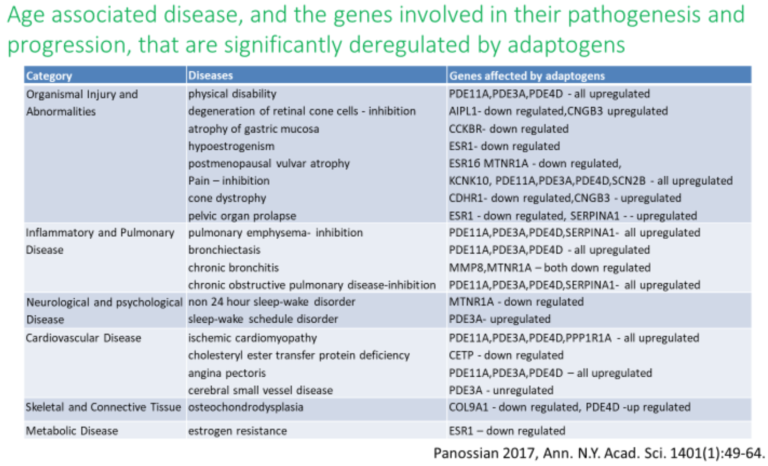 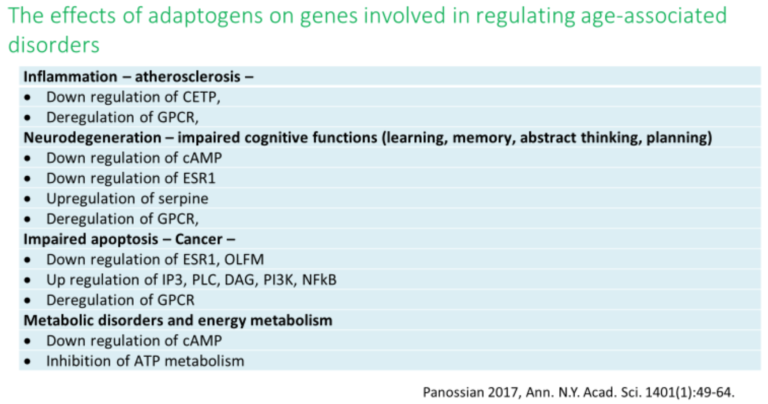 The term adaptogens is used in alternative and complimentary medicine, pharmacognosy, phytomedicine, phytopharmacology, and phytotherapy research (6-14).  Initially, the term adaptogen was coined to describe substances that can increase the “state of non – specific resistance to stress” (15,16). Originally, the adaptogenic concept (3,7-12) was based on Hans Selye’s theory (17,18) of adaptive stress response of neuroendocrine immune complex (19,20) and long-term traditional use of some medicinal plants that are believed to promote physical and mental health, improve defense mechanisms of the body, and enhance longevity (7-14, 21-33).  It was suggested that certain compounds and herbal extracts, termed adaptogens, could diminish the magnitude of the alarm phase of adaptive stress response and prolong the duration the phase of non-specific resistance to stress (7,15). Based on evidences mainly from animal studies, adaptogens were defined as nontoxic “metabolic regulators, which increase the ability of an organism to adapt to environmental factors and to avoid damage from such factors” (6, 9).  It should be emphasized that the term “adaptogen” is associated with a physiological process – adaptation to environmental challenges, which is a multistep process that involves diverse mechanisms of intra- and extracellular interactions.  The updated definition of adaptogens (1) is supported by results of recent studies of molecular mechanisms of action of adaptogens on a variety of regulatory systems from the cellular level to whole organism (1, 34-48).

Pharmacology and the Mechanism of Action

There are many molecular targets for stress response modifiers since stress response and adaptation to environmental challenge are multistep processes that involve intracellular and extracellular signaling pathways at all levels of stress regulation.
Stimulating and stress-protective effects are characteristic and common pharmacological effects of adaptogens (9,11,31). These have been observed in many animals and humans by testing their cognitive function and physical endurance under stressful conditions (8,9,11,39, 42,43). The main difference between adaptogens and conventional stimulants, such as caffeine, amphetamine, etc., is that after prolonged use, the later can cause the user to develop both tolerance and addiction, Table 2 (12, 43). Adaptogens exhibit polyvalent beneficial effects against chronic inflammation, atherosclerosis, neurodegenerative cognitive impairment, metabolic disorders, cancer, and other aging-related diseases (22, 27, 49, 50). All of them are associated with the metabolic regulation of homeostasis and threatened adaptability of stress system.

Table 2. The Differences in Properties Between Adaptogens and Other Stimulants.

The metabolic regulation of homeostasis by adaptogens at the cellular and systemic level is associated with multiple targets (1, 34-47). Consequently, the pharmacology of adaptogens is a typical example of network pharmacology that can be approached using the systems biology concept (1). The classic reductionist model that presumes a specific receptor/drug interaction (51) is unsuitable for this scenario and insufficient when attempting to understand the mechanism of action of adaptogens. Molecular targets, signaling pathways, and networks common to adaptogens have been identified (1, 34-47). They are associated with stress hormones and key mediators of the regulation of homeostasis (molecular chaperons Hsp70, neuropeptide Y, G protein-coupled receptors, dopamine-cAMP-PKA-CERT, IP3,  PLC, DAG, PI3K, NFkB,  mediated signaling pathways, stress activated kinase JNK, FOXO3, cortisol, estrogens, nitric oxide, etc.) (1, 34-47).

A characteristic feature of adaptogens is that they act as eustressors (i.e. “good stressors”), and as mild stress mimetics or ‘stress- vaccines’ that induce a stress-protective response (44, 47).  Adaptogens exhibit multitarget action and the shared use of several different receptors, including receptors for corticosteroid, mineralocorticoid, progestin, estrogen, serotonin, NMDA, and nicotinic acetylcholine, receptor tyrosine kinases, and many G-protein coupled receptors (1, 34-47, 50,52-72). Therefore, the possibility that numerous molecular network interactions (with feedback regulation of the neuroendocrine and immune systems) contribute to the overall pharmacological response and result in agonist-dependent antagonism is most suitable for understanding the mechanisms of action of adaptogens (1).

Molecular targets, signaling pathways, and networks common to adaptogens are associated with chronic inflammation, atherosclerosis, neurodegenerative cognitive impairment, metabolic disorders, and cancer, all of which are more common with age (14, 34,35,36).

Current and Potential Use

Current and potential uses of adaptogens are mainly related to stress-induced fatigue and cognitive function, mental illness, and behavioral disorders, infectious diseases (9, 13, 32, 42, 43, 76-85, 89-100). Their prophylactic use by healthy subjects to ameliorate stress and prevent age-related diseases appears to be justified (14, 21, 23-26, 42,43, 89-93), e.g. Rhodiola rosea, Withania somnifera and Eleutherococcus senticosus downregulate the expression of key genes (ALOX5AP, DPEP2, LTC4S) involved biosynthesis of leukotrienes A, B, C, D and E, resulting in inhibition of leukotriene signaling pathway suggesting their potential benefits in Alzheimer disease (89). Recent observations indicate on potential beneficial effects of adaptogens on neuronal functions associated with mild cognitive impairments in cancer chemotherapy (91-93, 95-97).
In a number of clinical studies, beneficial effects of adaptogens have been demonstrated on healthy subjects in stress conditions (42,43, 73-81, 95-97). This is especially true of the mental and physical performance of fatigue and mental strain (42,43, 73-81, 95-97). Furthermore, efficacy of adaptogens in mild and moderate depression has been demonstrated (32, 82-85).
Adaptogens have been used for the last decades in the official medicine of Russia and neighbor countries (Estonia, Ukraine, Armenia, Kazakhstan, etc.) as a stimulant against fatigue by patients who suffered asthenic states and by healthy people who showed asthenia during periods of high mental exertion or after intensive physical work (2, 27, 86, 87). Adaptogens are also applied in psychiatric practice.  (13, 32, 84, 85).
In Sweden, Norway and Denmark, rhodiola traditional herbal medicinal product is indicated as an adaptogen in situations of decreased performance such as fatigue and sensation of weakness.
Dietary supplements containing rhodiola, withania, ginseng, eleutherococcus, schisandra and other adaptogenic plant extracts are widely used all over the world (6).